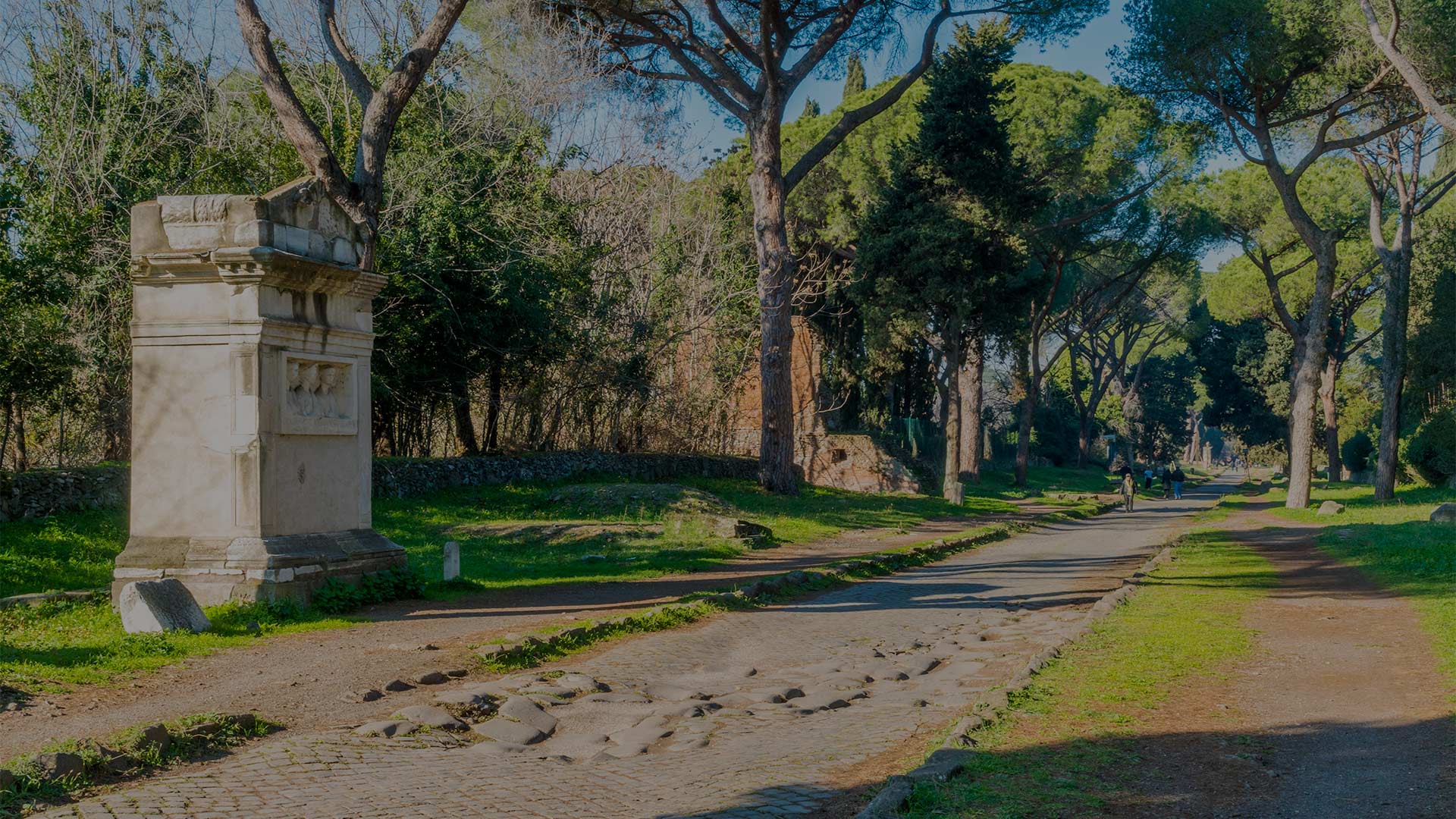 An excursion on the ancient Appian Way

Regina Viarum. The greatest contribution to the
development of civilization.

The immense complex of roads built by the Romans represents a work of extraordinary engineering which, with a total of 100,000 km of paving, is the “longest” monument that has come down to us and Rome’s greatest contribution to the development of civilization. Other peoples were great organizers and fighters like the Romans; other peoples, like them, have left impressive architectural and artistic testimonies; no other people at that time in history was able to match their ability to choose the routes, their construction techniques and their organization of assistance to travellers.

Pliny the Elder wrote:
The Romans took great care in three things above all, which were by the Greeks neglected, namely, in opening the roads, in building aqueducts and arranging sewers underground.

The first and most important of the great consular roads that lead out of Rome was the Via Appia,the so-called Regina Viarum (the queen of the roads). Desired by Appio Claudio Cieco (the same man to whom we owe the construction of the first aqueduct of the city), its construction began in 312 BC to connect Rome to Capua. The road was later extended several times as far as Brindisi, in the 2nd century BC, forming the road axis of communication with the East, with a total distance of 365 miles, equal about to 540 km. To cover the entire route it took 13-14 days, during which time it was possible to stop and change horses at the numerous post stations, which were often equipped with refreshment places and accommodation for travellers. With the fall of the Roman Empire, the road was abandoned and remained unused for a long time. Throughout the Middle Ages it took on the role of a pilgrimage route both because it was bordered by catacombs and because from Brindisi pilgrims embarked for the Holy Land. Only during the Renaissance, its slow recovery began. 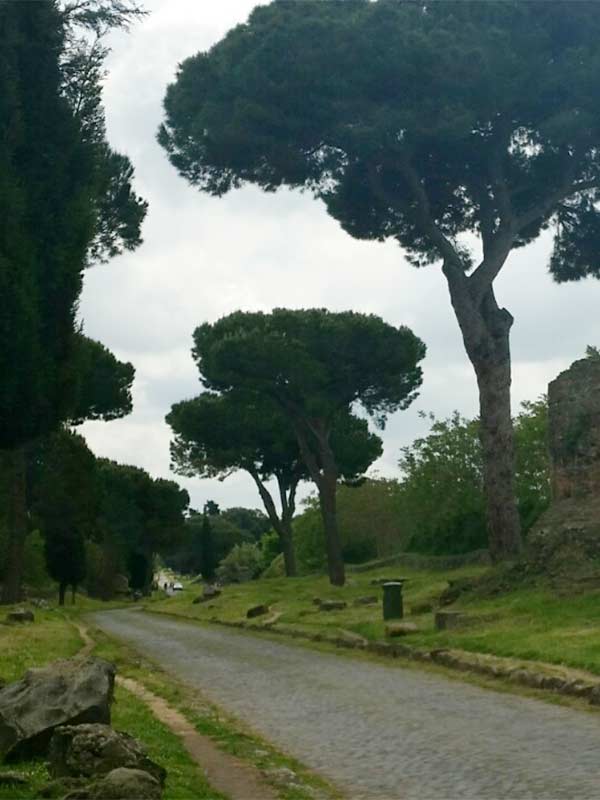 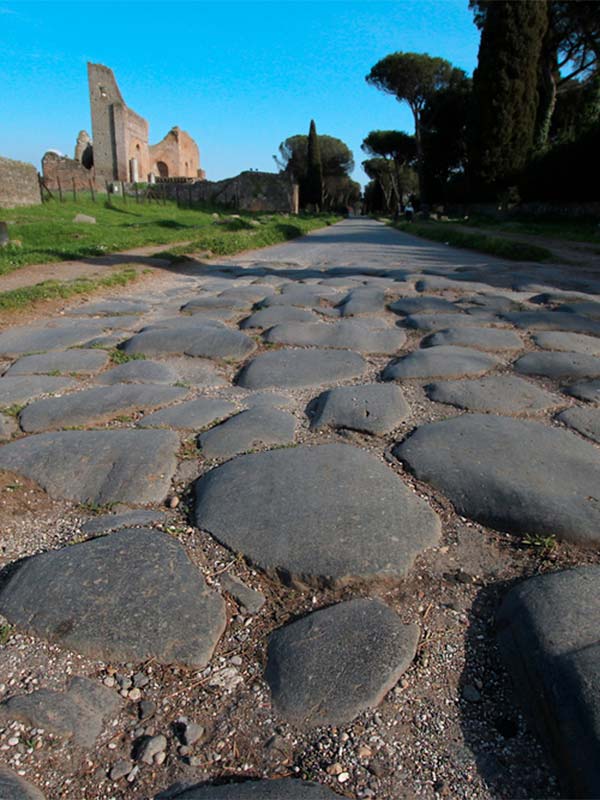 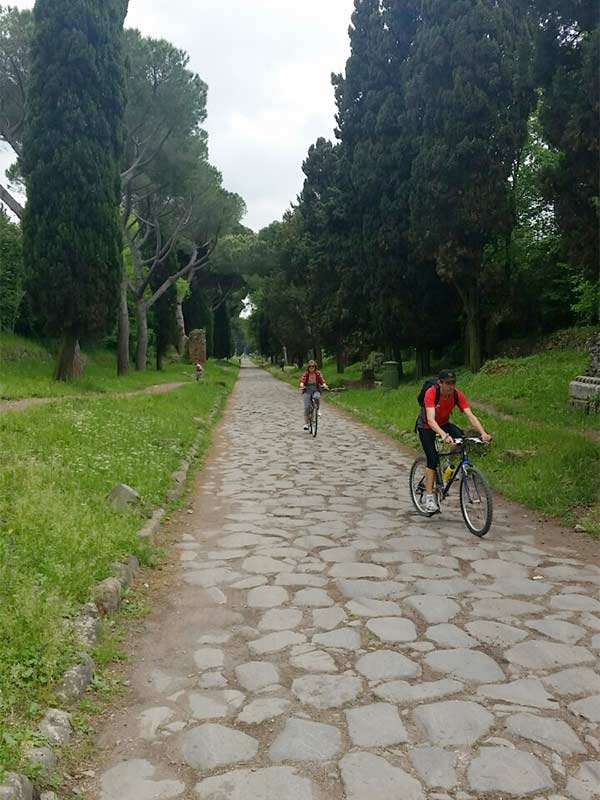 A true open-air museum whether on
foot or by bicycle

Whether on foot or by bicycle, the Appian Way, with the park of which it is part (Appia Antica Regional Park), constitutes a true open-air museum and allows a walk surrounded by greenery and in some places, it is easy to think you have gone back in time. During the stroll you are able to discorver: large parts of the original road that have been preserved to this day, important funerary monuments (sepulchre of Cecilia Metella), the Villa dei Quintili, the Parco degli Acquedotti, the tombs of Via Latina, remains of thermal baths, Roman constructions from the period between 300 BC and 400 AD, churches (Santa Maria in Palmis,famous under the name of Church of Domine Quo Vadis.

According to an episode narrated in the Acts of Peter, the apostle, fleeing from Rome and Nero’s persecutions, met Jesus. “Domine, quo vadis?” (Lord, where are you going?) the apostle is said to have asked Jesus, and He answered “I am going to Rome to be crucified again”. A small marble slab in the centre of the church holds two footprints (which, according to legend, were left by Jesus) and catacombs of the first Christian communities (the Catacombs of San Callisto, probably the most important in Rome, with galleries stretching for almost twenty kilometres, and the catacombs San Sebastiano).

Whether with family or friends or a fun outdoor team-building activity, exploring the archaeological, historical and natural areas of the Park on a guided tour is the best way to fully enjoy a relaxing day or spend some quality time with friends or colleagues, surrounded by the suggestive Roman countryside. So why not enrich the experience of your walk, on foot or on two wheels, making it unforgettable with a tasty and relaxing picnic, with attention to small detail: baskets, towels, flutes, … and of course lots of delicacies?